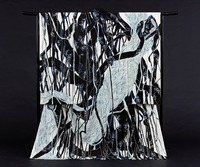 The arrival of the night is announced quietly, and the sky starts to prepare for the sunset.

This work expresses the quiet and beautiful night that we have forgotten, with the theme of Tsukuyomi no Mikoto, the god who controls the night in Japanese mythology. Everyone feels the arrival of the night when they see the sun setting on the horizon, and their surrounding becomes dark. However, shortly before dusk begins, a white time signals the end of the day. I see this moment as the signal of the night's arrival. The spirits prepare paints for the dusk, and when the sun begins to set, they paint the sky red and welcomes the god of the night. Eventually, the night falls. Tsukuyomi creates deep and beautiful darkness and invites us to the world of dreams. However, today, the darkness is illuminated, not by the moonlight, but by the neon lights, cars, and smartphone screens.

Tsukuyomi is a mysterious god, even among the mythical gods. The prominent theory is that he was born when Izanagi God washed his right eye and is a brother of Amaterasu Omikami. However, the gender of Tsukuyomi is not specified, and there is also a theory that Tsukuyomi is a goddess. Yet, no further detail is said neither in Kojiki nor in Nihon Shoki. However, I felt feminine beauty in the sound of the name "Tsukuyomi"; thus, I made this work with my imagination in the direction that Tsukuyomi was a goddess.